Pizzatron 3000 was one of Gary's inventions and a game that was located in the Pizza Parlor. It was used by penguins to create pizza. It was created by Club Penguin's inventor and scientist, Gary the Gadget Guy, and released on February 26, 2007.[1] An alternative level of this game was hidden at the start of the game and was called Candytron 3000, substituting pizza ingredients with candy. To start Candytron, you must go to the start of the game and you will see a switch, click on it and it will turn into the candy picture, enter the game, and there is Candytron!

When playing, the player must look at a sign on which the current order is displayed. Then, they must make the correct type of pizza. The correct type of pizza must exactly match the type of sauce and number of toppings shown on the sign. Every correct pizza was worth five coins. If the player made a mistake, the incorrectly made pizza would not sell, but they would have a chance to remake that pizza. If you incorrectly made a pizza, no coins were subtracted from your score. After making five correct pizzas in a row, a bonus tip was given.

Tips start at ten coins per pizza and increase by five additional coins for every five correct pizzas in a row. If the player made five mistakes or forty pizzas in total the game was over, and the coins were given to the player. After the Puffle Party 2013, the Pizza Parlor hot sauce was stolen due to Operation: Hot Sauce. The machine was out of order from April 5th to April 18th, 2013.

To go to the secret level, you will have to click on the lever at the left side of the Pizzatron 3000 on the starting screen. Then, click Start. It will not show as Candytron 3000 on the starting page or the instructions page. This game yields more coins than Pizzatron 3000. The Candytron 3000 has a few stamps to give out, such as Cocoa Beans and Dessert Chef.

Original gameplay of the Candytron 3000 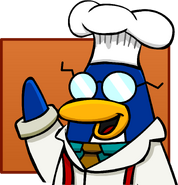 Gary after the conclusion of his invention, the Pizzatron 3000

A perfect score in the standard mode

The old starting screen (If you are other colors, you will be light blue penguin)

A penguin pulling the secret lever 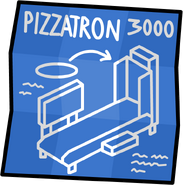 One of the icings for the Candytron 3000

The gameplay on the app

Making your own pizza in the app version 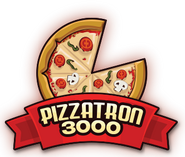 The logo in the app

The title screen in the app

The out of order note during Operation: Hot Sauce if the player was not an agent

The out of order note during Operation: Hot Sauce if the player had not accepted the mission yet

The out of order note during Operation: Hot Sauce if the player was an agent
Add a photo to this gallery 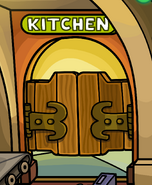 Retrieved from "https://clubpenguin.fandom.com/wiki/Pizzatron_3000?oldid=1866135"
Community content is available under CC-BY-SA unless otherwise noted.