It was initially home to only the Pizza Parlor and (at the time unopened) Pet Shop, alongside Puffle Roundup. In May 2007, a path to the Forest was added. In November 2007, the Stage was added between the two previous buildings. In March 2013, the Puffle Hotel was built between the Pet Shop and Stage. In June 2015, the Stage closed permanently and was replaced by the Mall.

The Plaza had four buildings and one manhole that could be used to access the Underground Pool. There were also two paths leading out of the Plaza to the Snow Forts and the Forest.

There were no games to play in the Plaza but it was a great place to go to browse many different rooms. It was also always decorated for Parties.

January – May 2007, before the opening of the Forest

Preparation for construction of the Puffle Hotel at the Plaza

Construction of the Puffle Hotel at the Plaza 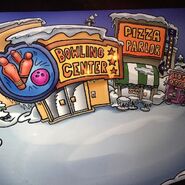 Early concept art of the Plaza, which would have originally contained the Dojo and had placeholder puppies instead of puffles. [4]