Prince Redhood is a prince in the play Fairy Fables. He is an orange penguin with a hat, costume, and a Red Cape. Prince Redhood starts off in the play delivering croissants to the princess. While traveling through the enchanted forest, he encounters a sheep. The sheep wants the croissants, and so when he does not get them. He he inhales deeply and then proceeds to blow the prince away. The prince luckily escapes, and reaches the princess. After breaking the princess' trance, she prefers not to have the tasty treat, and so the prince gives them to the sheep. 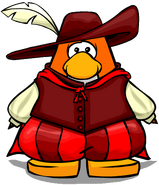 What Prince Redhood would look like on a Player Card 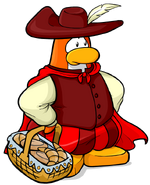 On the computer in Herbert's Hoard Lair
Community content is available under CC-BY-SA unless otherwise noted.
Advertisement