The Prototype Sled is a special sled invented by Gary the Gadget Guy. It is made of random parts from around the Club Penguin Island. A pot was used as the steering wheel, and a hamster wheel from the Pet Shop, etc.

The Prototype Sled was first used in the PSA Secret Mission #2, and introduced the problem into the story. Secret Agents were to test the sled and then report to G to explain the results. During the test run, the sled falls apart and you crash in The Wilderness, home to wild puffles. You then were to use the Survival Guide to survive. When you were rescued, you would report to G and tell him the sled fell apart. The sled was rebuilt and was put on display in the Gadget Room. It has not been used since.

The Prototype Sled, near the Test Run 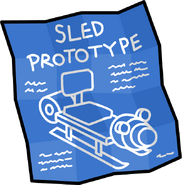 Blueprints of the Prototype Sled, as seen in Mission 4

Retrieved from "https://clubpenguin.fandom.com/wiki/Prototype_Sled?oldid=1906303"
Community content is available under CC-BY-SA unless otherwise noted.