Puffle Bowling was a game featured in the Beta Team website of Club Penguin. It featured a Blue Puffle that is thrown into an icy bowling area and has the objective of dodging obstacles.

Near the end of the level, all obstacles were completely removed (except for the edges of the route) and the puffle slowed down. At the very end were 10 bowling pins which were pushed aside when touched (though pushed pins couldn't push other pins that they hit). After passing the area of the pins, the puffle would keep rolling forever, without any completion screen. 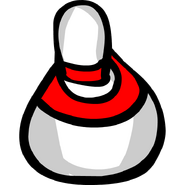 The again button
Add a photo to this gallery

Retrieved from "https://clubpenguin.fandom.com/wiki/Puffle_Bowling?oldid=1920093"
Community content is available under CC-BY-SA unless otherwise noted.