Were you looking for the Adopt A Puffle Catalog?

Puffle Catalog (formerly Pet Furniture: Love Your Pet and Love Your Pet) was a catalog in the Pet Shop and your igloo which sold various puffle-related items. A new catalog came out approximately every year. In every issue of the catalog, there were puffle beds, feeding dishes, food and furniture that puffles could interact with. Most items in the catalog could only be purchased by members, but the puffle food items could be purchased by non-members as well. 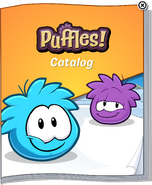