The Puffle Interface is a feature on Club Penguin, that was added in March 2011. It replaced the old puffle player cards, and allows penguins to see their Puffle's mood, feed them Puffle Food and play with them. It also allows making Puffles sleep, take them for a walk, and dress them with Puffle Hats. Unlike their domesticated counterparts, Puffle Creatures do not have access to the Puffle Interface. Instead, they only are able to be properly raised while in the Puffle Hotel, cannot wear Puffle Hats, nor be fed the food available from the Puffle Catalog.

The blueprints for the interface, as seen in the Pet Shop Rebuild

An example of the Puffle Interface

A Puffle reaching full stats
Add a photo to this gallery 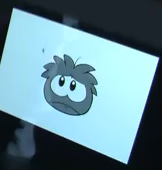 Retrieved from "https://clubpenguin.fandom.com/wiki/Puffle_Interface?oldid=1912404"
Community content is available under CC-BY-SA unless otherwise noted.