Puffle Launch was a game in Club Penguin that was released on March 15th, 2011. The game's focus is launching Puffles in the air through cannons to collect Puffle-Os that had gone "missing". In addition, the player also has to fight Klepto, a crab who has stolen parts of various machines over the island, to continue collecting the Puffle's famed treats. The game is exclusively available to paid members for worlds 2 and 3; though all players can play world 1, whose progress would be reset back to level 1 once the game is exited. 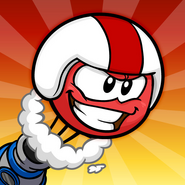 Retrieved from "https://clubpenguin.fandom.com/wiki/Puffle_Launch?oldid=1806007"
Community content is available under CC-BY-SA unless otherwise noted.