Not to be confused with the Game Day! version of the game.

Players must try to keep all of the puffles in the air using a table tennis paddle. Keeping the same puffle in the air longer increases the player's score. As the player earns points, and tickets more puffles are introduced and must be juggled simultaneously.

The tickets that the player wins at the end of the game are calculated by multiplying the most number of puffles that were bounced at a time by the number of times you have bounced the most bounced puffle in the game. The product is then added to the Total Bounce Points of the game.

The Rules for the game 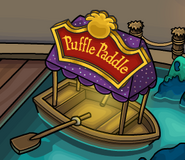 Retrieved from "https://clubpenguin.fandom.com/wiki/Puffle_Paddle?oldid=1924452"
Community content is available under CC-BY-SA unless otherwise noted.