Puffle Rescue was a game that was released on March 15, 2010. The objective of the game was rescuing puffles from dangerous situations, following the Cave Mine rockslide. This game was located in the Mine right outside of the Cave Mine. The game was divided between 3 different modes: Ice Levels, Cave Levels and Underwater Levels. Non-members could only play the Ice Levels, while members could play all of the levels.

In the Ice Levels, the player had to walk on moving ice bricks that float above water to rescue Blue Puffles — 1 to 3 each level — which were found on special platforms, also used as check points. If players fell into the water, they would lose one life and start the game from the latest check point. The player could carry several puffles at the same time as well.

On this game mode, the player had to rescue Pink Puffles from caves. The penguin wore a Green Suit. Every 3 levels would get harder and harder.

On this mode, the player had to rescue Black Puffles. The player used a blue swimsuit to swim from the different bricks of the game, but if they stayed in the water for too long, they would eventually sink and start over.

On the first level of this mode, the player could follow the Giant Squid and find the Moss Key Pin, which allowed entering the Underwater room.

Bats were helpful creatures found in the Cave Levels of Puffle Rescue. They started to appear in Level 6. If the penguin stood in an orange spot, they appeared and would pick you up. While carried by them, the player could use the left and right arrow keys to steer them. If the player steered them to another orange spot, they would drop him/her. Players also needed to be careful to avoid hitting the walls when steering the bats, because they would drop him/her down into the pit. Not much is known about the bats, although, there was a bat-like creature in Gary's Room above the Sports Shop that when you clicked on it said: "This looks like some kind of fox, but it's flying!". This tells us that the bats were possibly Flying Foxes.

Not to be confused with the Giant Squid. They were enemies in the Black Puffle level of the game. They moved in either side-to-side patterns or box patterns, and sent out an electric charge when the penguin got closer to them. Getting too close would cause the player to lose a life. However, if the player was touching the border, they would not lose a life. It was the only other non-existent animal in Club Penguin besides Puffles, although it had a very similar real-life counterpart, the Squid and the Octopus. The first two tentacles were somewhat shorter than the rest of the arms. It had three pale peach colored spots on its mantle. It seemed to enjoy shocking penguins. It also seemed to be evil, as it would smile when you got shocked. It appeared to be missing its breathing tube, or siphon. This type of Octopus seemed to have evolved from spraying ink to having a more effective defense, a powerful electric force field that gave powerful shocks, although, octopuses do not release electricity in real life.

Sharks appeared in the Blue Puffle levels of the game where they went across the icy platforms eating all the ice in their path and leaving a trail of deadly water. They usually moved around the edges, though they sometimes made sudden turns right into the players. If the penguin touched a shark or was standing on an ice block when the shark destroyed it, they would lose 1 life.

The Giant Squid appeared briefly in Puffle Rescue. It helped you find an entrance to the Underwater room while playing in the Black Puffle level. After this it no longer appeared.

The renovated Puffle Rescue Board 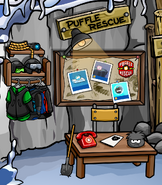 The old Puffle Rescue Board

The Puffle Rescue Board during Operation: Puffle 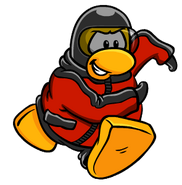 The rescuer from the Snow Levels

The Phone as seen on the Puffle Rescue desk 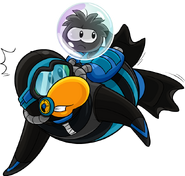 The penguin as seen in the last stamp book photo 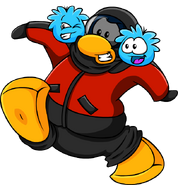 A rescuer with two Blue Puffles 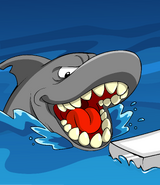 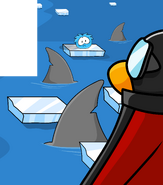 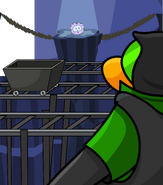 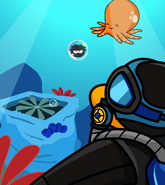 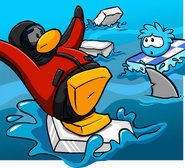 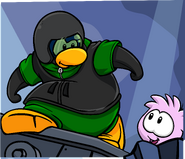 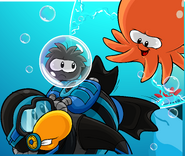