Puffle Roundup (formerly known as Puffle Game) was a mini-game in Club Penguin located in the Puffle Park. The objective of the game was to round up the puffles into the pen by moving the mouse cursor. The player had 120 seconds in each round. The score depended on how many puffles were successfully caught multiplied by the number of seconds left divided by ten. If puffles were driven out of the area, they would escape.

The game used to feature all types of puffle, except red, which was added after the original version of the game was made. When Club Penguin gave double coins for the game, the Red Puffle was added. The Yellow Puffle and the White Puffle have been seen, but they were not common to be found. On October 23, 2010, the Orange Puffle was introduced into the game. It was one of the least popular games due to its length, though it was one of the most useful games to earn coin revenue.

The game was at the Snow Forts before it was moved to the Pet Shop, because puffles were first seen and collected there.

Each puffle had low speed and fast speed:

As seen from the Snow Forts in early 2006 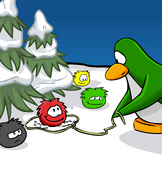