If you were looking for the beta version, click here.

Pufflescape was a game in Club Penguin, which was accessible from the Pet Shop. It was released on November 3, 2011, right after the Halloween Party 2011.

There were 23 levels in 3 different level sets, while the player could play in the regular mode, or extreme mode, which was more challenging.

Support Story from issue 314 of the Club Penguin Times 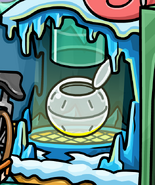 Complete Entrance Levels
Add a photo to this gallery

Retrieved from "https://clubpenguin.fandom.com/wiki/Pufflescape?oldid=1912473"
Community content is available under CC-BY-SA unless otherwise noted.