The Purple Bat Wings were a head item in Club Penguin. All players could obtain them at the Plaza during the Halloween Party 2010. They could also have been unlocked from the thirty-sixth issue of the Club Penguin Magazine. 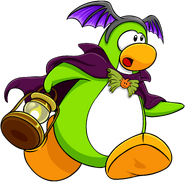 As seen on a Halloween Party 2010 Login Screen, along with The Count's Cloak and Storm Lantern
Add a photo to this gallery

Retrieved from "https://clubpenguin.fandom.com/wiki/Purple_Bat_Wings?oldid=1913362"
Community content is available under CC-BY-SA unless otherwise noted.