The Purple Propeller Hat was a rare head item in Club Penguin. It was available to all players at the Dock during the April Fools' Party 2011, by painting the canvas using snowballs. 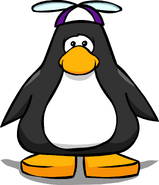 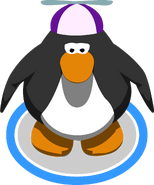 A penguin flying while wearing the item with the Jet Pack

SWFEdit
Retrieved from "https://clubpenguin.fandom.com/wiki/Purple_Propeller_Hat?oldid=1888104"
Community content is available under CC-BY-SA unless otherwise noted.