The Quartz Pin was a rare pin in Club Penguin. It was hidden in a room under the Stage while Norman Swarm Has Been Transformed was playing for the second time, and all players could obtain it. In order to obtain the pin, multiple penguins had to stand on the "X" marks, which caused the chest the pin was in to open. 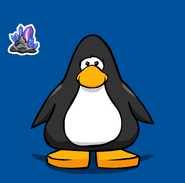 The Underground while it was hidden 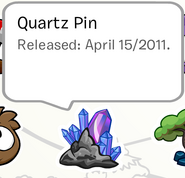 Retrieved from "https://clubpenguin.fandom.com/wiki/Quartz_Pin?oldid=1919115"
Community content is available under CC-BY-SA unless otherwise noted.