The Recycletron 3000 was an invention made by Gary the Gadget Guy. It was located inside the Recycling Plant. While throwing snowballs into its aperture, they would turn into garbage and become recycled, the recycled parts would then turn into various items. The items would then be carried by a mechanical claw. 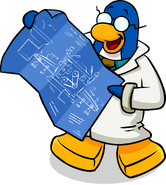 Gary holding the blueprints for the machine, as seen in issue 234 of the Club Penguin Times
Add a photo to this gallery

Retrieved from "https://clubpenguin.fandom.com/wiki/Recycletron_3000?oldid=1876825"
Community content is available under CC-BY-SA unless otherwise noted.