The Recycling Plant was a processing plant in Club Penguin, located by the Mine Shack, that was used to recycle various unusable junk into new objects. First opened during the Earth Day 2010 party, the main feature of the plant was the Recycletron 3000, a device built by Gary the Gadget Guy. Also located in the plant were various machines to assist in the process, which could be interacted with. Throwing snowballs resulted in trash being thrown, and if thrown into the Recycletron, it would be remade through the machine. When the room first opened, players needed the Recycle Pin to enter the room. After the Earth Day 2010 party, all players could enter.

The room was closed down in July 2013, and was replaced by the School. 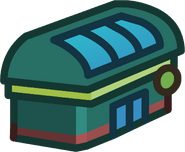 As seen on the map

The exterior during the Halloween Party 2010

The exterior during the Holiday Party 2012

The exterior during the Hollywood Party