Not to be confused with the Antler Headband, from Club Penguin Island.

The Reindeer Antlers were a head item in Club Penguin. They could have been obtained for free during the Christmas Party 2007 at the Dock, and at the Holiday Party 2010 in the Ski Village. In addition, they were unlockable from series 1 and 5 of the Treasure Book. All players could also obtain them for free from the 2015 Advent Calendar. 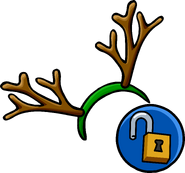 As seen in series 1 of the Treasure Book, along with the Elf Suit and Elf Shoes

As seen in series 5 of the Treasure Book, along with the Elf Suit and Elf Shoes
Add a photo to this gallery

Retrieved from "https://clubpenguin.fandom.com/wiki/Reindeer_Antlers?oldid=1876953"
Community content is available under CC-BY-SA unless otherwise noted.