The Report a Player menu is a feature that is used to report penguins that have broken the rules.
The choices on the menu include bad language, being rude or mean, lying, cheating, having a bad penguin name or asking for Personal Information.
The reports are reviewed by moderators, that then ban the reported player if they broke the rules, or the report sender, in case they had sent a false report.

The Report button as seen on a Player Card 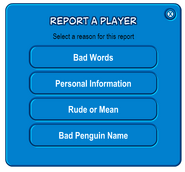 Retrieved from "https://clubpenguin.fandom.com/wiki/Report_a_Player?oldid=1906353"
Community content is available under CC-BY-SA unless otherwise noted.