Rhythm Lock is one of the games in Spy Drills. It was also playable in some Field-Ops. Before Field-Ops were destroyed, this was one of the mini-games that players could beat to earn a medal.

The game features a lock in the form of 3 layers of rings. Each ring is divided into quarters, with each quarter containing 7 slots. Each ring has an associated rhythm, represented as a filled pattern of note blocks in the slots of 2 of the opposite quarters. The player must repeat the rhythm in the empty quarters of each ring based on the rhythm of the respective ring.

The game starts with the outermost ring, with a target marker positioned on its top. The ring rotates counter-clockwise, and whenever a note block from the 2 default quarters moves below it, it would glow and emit a ticking noise. When the marker reaches an empty quarter, filling the empty slots is done by pressing Space whenever the marker is positioned above a block that matches the pattern.

The game is won once the inner ring is completed. 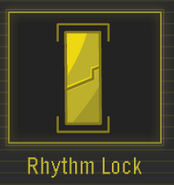 The icon in Spy Drills
Add a photo to this gallery

Retrieved from "https://clubpenguin.fandom.com/wiki/Rhythm_Lock?oldid=1906354"
Community content is available under CC-BY-SA unless otherwise noted.