RocketSnail Games is an online developer of games and comics. They created Penguin Chat (an older version of Club Penguin) and is an old website that was closed down due to a lack of funding, but got re-opened as a blog. Although they created both Penguin Chat and Penguin Chat 3, but they were eventually shut down.

In the summer of 2005, rocketsnail.com had a sneak peek of a new game called Club Penguin. It was created by Rsnail, a former Moderator of Club Penguin. Rsnail used it as a micro blog from April 14, 2009, to an unknown time before summer of 2010.

Mancala Classic is identical to Mancala in Club Penguin, and is still available to play.

Mancala Snails is a game that is the same as Mancala, except, instead of moving mancala stones, you move mancala snails. When the snails jump in the jar, a rocket will come out of their back (hence the name Rocketsnail Games). This game is still available. Play it here

Ballistic Biscuit was like Club Penguin's Hydro Hopper, except that there were humans in it instead of penguins (although there was one on the boat). Club Penguin's Hydro-Hopper used to be called Ballistic Biscuit, until the name was changed due to a vote. Some of the other choices were "Board Blaster" and "Water Yachter." There are different variations of this game as well, made for many websites, like they did with Penguin Chat.

Everyday there was a new theme of word crunching. This game is also still available. Play it here An iPhone version was released on December 10, 2011.

Rocketsnail also made other games like Goat Chat, Crab Chat, Snail Chat, and many more.

If you want to see the archive remake of the Rocketsnail CP blog, you can see it here. Or, if you prefer, this is back up, but now it is only a blog.

If RocketSnail was searched into a good search engine, the first website to come up would be RocketSnail. If the site was visited, a Christmas picture would come up referencing to snails. In the corner there was a message saying 'Relaunching in Spring 2011'. He relaunched his blog early: http://blog.rocketsnail.com/

Rocketsnail.com was re-opened as a micro blog for a short period of time]] RocketSnail Games website is now re-accessible.[2]

Rsnail said you can give him a message on rocketsnail.com

Rocketsnail.com has re-opened as a micro blog! 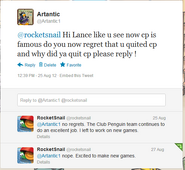 The background of Rocketsnail Games' site

Rsnail and Rocketsnail's Toys
Add a photo to this gallery