Rockhopper (commonly referred to by his title, Captain Rockhopper) is a friendly pirate who docks at Club Penguin Island. Players can usually find him on the Migrator, docked at the Beacon Boardwalk, ready to offer adventures in exchange for prizes like coins, emojis, and more.

Upon arrival to Club Penguin Island, the Lighthouse is broken, causing Rockhopper to sail through fog without the light as a guide. With limited visibility, his ship, the Migrator, consequently runs into rocks, causing damage and water to leak in. In fear of sinking, Rockhopper instructs the player to launch themselves out of a cannon to reach the island's shore and go talk to Aunt Arctic. After greeting Aunt Arctic, the player is instructed by her to search nearby for 3 piles of wood. Upon collecting the wood, the player returns to the now docked Migrator. Rockhopper then gives the player a jackhammer and instructs them to hammer the wood on top of the leaks. After repairing the damage, Rockhopper thanks the player and gives them a reward of gear, which is a jackhammer, 9 emojis, 50 coins, and 10 XP (Rockhopper).

Rockhopper then informs the player that their starter kit was lost during the ship crash, but that he suspects the ocean tides have carried it to Coconut Cove. The player finds the kit on a platform surrounded by water, which is accessible by zipline. After retrieving the kit, Rockhopper instructs the player to find Aunt Arctic, who has the key to open it, at the Beacon Boardwalk.

Bottled Maps requires Aunt Arctic rank 1 to be unlocked, instead of Rockhopper rank.

On The Migrator, at the Beacon Boardwalk

Talking to Rockhopper after finishing his first adventures

Rockhopper during the 2018 Pirate Expedition event

Rockhopper with the Bottle of Fair Winds

Rockhopper at the Pirate Expedition 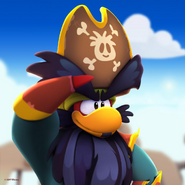 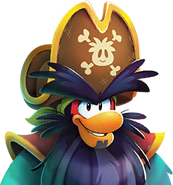 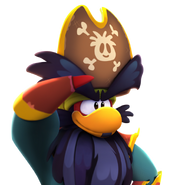 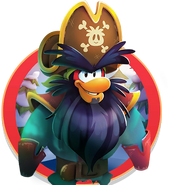 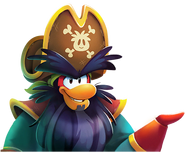 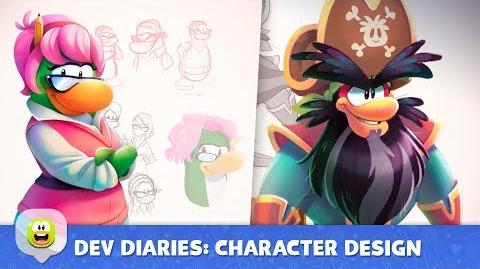 Retrieved from "https://clubpenguin.fandom.com/wiki/Rockhopper_(CPI)?oldid=1902124"
Community content is available under CC-BY-SA unless otherwise noted.