Rockhopper and the Stowaway

Rockhopper and the Stowaway was a book in the Book Room that was released in March 2007. It was published by the Snowball Press. It featured Bambadee and Rockhopper as the main characters of the story line. Yarr was also mentioned in this book. The Friendship Bracelet was obtainable by clicking on it on the last page of the book.

One day, while at sea, Rockhopper is studying his charts when a hankering for cream soda overshadows his concentration. When searching below deck to find a new barrel, he notices two flippers poking out of an old treasure chest. Rockhopper tells the penguin, who reveals himself as Bambadee, that he is going to be brought back to Club Penguin Island in the morning. When Rockhopper goes back to his quarters to do a bit of writing, Bambadee tries to trick Rockhopper into letting him stay by dressing as a ghost but his bracelet gave him away. He then explains to Rockhopper that other penguins were teasing Bambadee because of his bracelet and name. Rockhopper reassures him that he does have friends and to give it a second chance.

The Migrator pulls close to the Dock and they part ways. The next time Rockhopper comes to Club Penguin Island weeks later, Bambadee comes up to him and tells what he had been doing ever since. The book ends after Rockhopper narrates how brave Bambadee had been.

The sky was dark. I was surrounded by night as I’ve never seen it. The ship had an eerie care to it under the cover of darkness. Creaks and groans from the floorboards gave me the jitters.

By candlelight I focused on my charts, welcoming the distraction from the creeping feeling of doom on me ship. A hankering for cream soda overshadowed my concentration, so I went below deck to hunt for a new barrel of it.

It was tucked away under several boxes, and as I pulled it out I noticed two flippers poking out from behind a rusty, oversized treasure chest.

I pushed it aside, curious as to who this stowaway might be.

"Ahoy there lad! Come here," I shouted.  "Who are ye and how did ye get on me ship? This be no place for little penguins!"

The penguin shyly emerged, looking back and forth from me to my puffle Yarr.

He be a light blue colored penguin and right away I noticed the colorful bracelet he be wearin’ as I’d never seen anything like it.

"My name is Bambadee,” the penguin said very quietly. "I snuck onto your ship before you left Club Penguin. I was hoping you’d never find me. I was going to leave quietly when you landed on an island.”

I put me flippers on me hips and looked sternly at him.

He stared up at me and asked sheepishly, “What will you do?”

“Arrgh! I tell ye this—me ship be no place for stowaways! Ye belong on Club Penguin. I’ve got half the mind to take you back without delay first thing in the morning.

I took me candlelight to the main cabin quarters and settled down to do a bit of writing. I heard Bambadee amble up to the main deck.

Sometime later a wind whistled through the ship and snuffed out me candle. Yarr jumped on me shoulder and I bristled. That old eerie care returned; this time a low howl accompanied it. My stomach turned over and I started up to the main deck.

The howling got louder and louder, until a white ghost appeared in front of me saying, “If you go back now you’re ship is doomed. Carry on your adventure and find the buried treasure.”

I took a few steps back, startled by the ominous message.

But then I noticed a colored bracelet on the ghost’s flipper as he approached. And I knew what sort of mischief be happening on me ship.

"I know it be ye, Bambadee! What be the meaning of all this tomfoolery?!"

The penguin stopped in his tracks, lowered his flippers and head and looked downtrodden. He removed the ghost sheet from his body, revealing it was young Bambadee.

"I'm sorry Captain Rockhopper," he said. “I thought if I could convince you to take me with you, I could get away forever. I just don’t want to be around those penguins on Club Penguin anymore."

“They weren’t friendly or helpful. I dressed up and went to parties, but the penguins I thought were my friends just made fun of me and teased me about my name. One penguin told me there was a party at the Dojo and said he would meet me there. I was excited to make a friend, and went straightaway. When I got there, the room was empty. Later I found him dancing on the Iceberg, but he wouldn’t talk to me. I felt like an outsider without any friends. I don’t think I belong there, Rockhopper.”

"Yo, ho, ho Young Bambadee! Truth be told, you do have friends. You be me friend, and I'm sure my puffle Yarr would have ye as his friend.” Yarr jumped up and down on me shoulder in response. "Ye see? Why don't ye return to Club Penguin; there be penguins who miss ye terribly. Give it a second chance."

“Really Rockhopper? You'll be my friend?” he said. He thought about it for a time and then said, “ I guess I could try again.”

We flew like the wind toward Club Penguin, and just a way from the Docks, Bambadee jumped into the sea and swam toward home. He waved farewell from the Dock.

I turned me ship around and flew toward the open waters before anyone could notice me sails.

Some several weeks later, I returned to Club Penguin. Bambadee caught my attention as soon as I arrived and told me the end of his tale.

“I bumped into those penguins who teased me, Rockhopper. They apologized as soon as they saw me.”

“’We teased you because we were jealous of your bracelet, but we were too shy to ask you about it. We know we were wrong. Can you tell us now where you got it?’”

“I made it myself!  It's called a friendship bracelet. If you like, I can make you one.’ They smiled! And we became friends.”

Bambadee told me how he worked hours to make bracelets enough for everyone and I know he’d be honored to share them. He told me he would wait until the time was right. He be a brave penguin in me books—and not just for hiding on me boat. But for facin’ his friends and his fears.

I be proud to call Bamabadee me friend and if you ever wear a colored bracelet, I know you be a friend of his too!

So there I was, sailing through the fog on a dark night as the wind groaned, and nary a star could be seen. Yarr and I had just left Club Penguin, but the mist was as thick as a cream soda float, so we had to steer the Migrator slowly.

While Yarr perched on the prow to look ahead, I listened to the quiet of the sea. The crash that come from me hold made me nearly jump overboard!

“Yarr! Keep watch! I need to check me treasure!” I called. He squeaked back twice and winked, which meant ‘aye aye, Captain’.

I took one of me lanterns down into the beard-black dark hold, and peered around.

I thought maybe a treasure chest had fallen, but when I raised me lantern, there was a ghost!

“BLIMEY BARNACLES!” I jumped backwards. “This be no haunted house!”

“RoooOOOooockhopper...” the ghost wailed. “You must do as I say, or your ship will be cursed.... FOREVER!”

I could barely believe what I was seeing; I rubbed me eyes and pinched me arm to be sure t’was real.

“You must go to the nearest island... And you must take, umm... this giant pair of sunglasses! Take them and leave them there... THEY’RE CURSED!”

I was dumbfounded, until I noticed the ghost was wearing a brightly colored bracelet. I smiled a pirate-smile.

“Be that a fact? Well, I’ll do as ye say, Mr. Ghost, but do me a favor, tell me where ye got that fancy bracelet.”

“Oh you like it!?” the ghost asked, in a very un-spooky voice. “I made it myself! You just need...” The ghost stopped.

“Ye best be taking that sheet off?” I said. The ‘ghost’ pulled off its disguise. Underneath was a light blue penguin. “Who are ye and what ye be doing here?”

“I'm sorry,” he said. “My name is Bambadee, and I snuck aboard to get away from Club Penguin...”

“Arrr!” I arred, stroked my beard and gave him a good look.

He seemed like a sad landlubber. “Alright Bambadee, here’s what we do... there be no stowaways on me Migrator, so I’ll grant yer wish and drop ye on the nearest island.”

“Avast! I be knowin' that already! Help me search for yer new home...”

On deck, I signaled Yarr that everything was okay. Then my plan got underway.

“If ye ask me, ye be makin’ the right decision, Bambadee...” I said, and took the helm.

“Life alone on a desert island be the best kind.” I turned the wheel. “Take me, for example. I’m alone — and great. Ye can play Mancala all by yourself, and you never lose!”

“Oh! And when ye have a party, you can eat all o’ the cake yerself! Avast! Just think of all the stomach aches!”

“Ahoy! Ye can even talk to yerself! Nobody interrupts ye!”

“Simple...” I kept turning the wheel. “I was lonelier than a lost left sock.”

He gasped. “YOU were lonely?"

“It be true. Even now, from time to time, I get homesick and go back to Club Penguin to cause a ruckus. I like surprisin’ penguins, and bringin’ them treasure from far off lands!”

“But what if penguins make fun of your gifts? Or your name? Or your hat?”

“Arr! It matters not! I don’t be makin’ friends by givin’ gifts,” I laughed.

“I give gifts to be generous! Who be carin’ if penguins don’t like me hat? It be a pirate’s hat, and it's a pirate’s life fer me!”

“Now!" I told him, still turning the wheel. "Let’s find you that island!”

Just then, we exited the fog, and there was Club Penguin.

“Blimey!” I said, “We got turned around somehow! Avast, what a strange fog this be!”

“So what be your decision Bambadee?”

We pulled up close to the Beach, and Bambadee jumped out. I winked at Yarr. We waved goodbye to the ‘ghost’ of the haunted sunglasses and set sail for Rockhopper Island.

The next time I visited Club Penguin, Bambadee was doin’ just fine. He had a gift for me, and for everyone else who reads this story and needs a little friendship. Take it and wear it proudly. 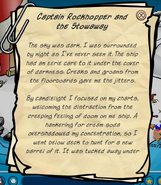 The note in the green bottle that showed up at the Beach, with a page of the book

The cover of the scrapped updated version of this book