Royalty Week was an event that occurred on the mobile version of Club Penguin. The event was first confirmed by Megg in a calendar on the What's New Blog.[1] It was originally set to take place from June 18 to 24, but was postponed due to technical difficulties.[2] Although no rooms were decorated, players were able to claim royal items upon logging into the Club Penguin App. 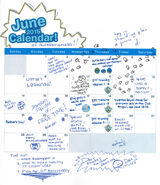 A sneak peek of the items

Retrieved from "https://clubpenguin.fandom.com/wiki/Royalty_Week?oldid=1877093"
Community content is available under CC-BY-SA unless otherwise noted.