The Rubber Duck is a gadget of unknown purpose located in the Gadget Room. It was first seen in Case of the Missing Coins in an "invention case". In addition, it appeared in Operation: Spy & Seek where it was used as a flotation device and transport for the tracker installed on it. In The Veggie Villain, Rookie was in possession of the gadget where he attempted to active it (albeit with little success). 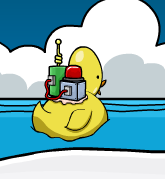 The Rubber Duck inflated, as seen in Operation: Spy & Seek

Retrieved from "https://clubpenguin.fandom.com/wiki/Rubber_Duck?oldid=1899972"
Community content is available under CC-BY-SA unless otherwise noted.