Ruby and the Ruby was a Stage play in Club Penguin. It first premiered in September 2008 and since then had six encores.

Private detective Jacques Hammer has a nose for sniffing out trouble. One night, in the middle of a terrible thunderstorm, the fiery Ms. Ruby turns up in his office with a problem. There's a missing gemstone, and Jacques is the man to find to find it. As he's looking around for clues, a fishy looking character turns up outside. Maybe he's got answers for Jacques...

The main characters in this play include the following:

Every 'session' the play was played, a different Ruby pin was hidden in a safe at the Stage. It was accessible by clicking the following items by the given order:

Construction before the play's first showing

The Stage during the play
Add a photo to this gallery 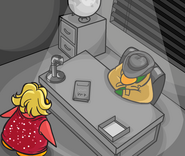 Square Ruby Pin
Add a photo to this gallery

Retrieved from "https://clubpenguin.fandom.com/wiki/Ruby_and_the_Ruby?oldid=1906380"
Community content is available under CC-BY-SA unless otherwise noted.