Joe standing beside the CP logo

Joe in a photo with the CP Team 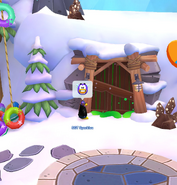 His penguin in front of the construction of the Halloween 2017

Retrieved from "https://clubpenguin.fandom.com/wiki/SGT_Sparkles?oldid=1871688"
Community content is available under CC-BY-SA unless otherwise noted.