Santa Claus also known as Father Christmas, or simply as Santa, is a penguin in folklore described to deliver presents to children every year on December 25. He has made various appearances in multiple clothing catalogs, and appeared in Elite Penguin Force, where players can help him deliver presents around the island, for a reward of coins. 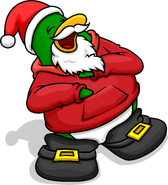 Santa in the Series 1 Treasure Book 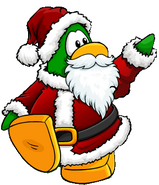