Not to be confused with the item of the same name from Club Penguin Island.

The Santa Hat was a head item in Club Penguin. All players could have obtained it for free from the various Christmas Parties, until 2009, or from the 10th Anniversary Item Calendar. It also cost 150 coins in the Penguin Style catalog, where only members could have bought it. It could also have been unlocked from series 1 and 5 of the Treasure Book. 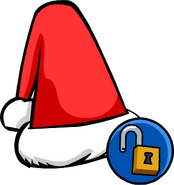 As seen in Experimental Penguins 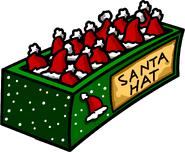 The Free Item Stand at the Christmas Party 2006

As seen in issue 115 of the Club Penguin Times 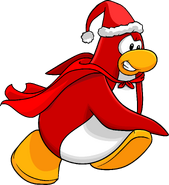 As seen on the Join Team Red postcard, along with the Red Cape As seen in series 1 of the Treasure Book, along with the Santa Beard, Red Hoodie, and Pirate Boots

As seen in series 5 of the Treasure Book, along with the Santa Beard, Santa Suit, and Pirate Boots

The Free Item Stand at the Holiday Party 2009

As seen in the December 2010 Penguin Style catalog, along with the Santa Beard and Santa Suit

As seen on a Holiday Party 2011 login screen 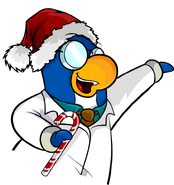 As seen on the cover of the December 2013 Furniture Catalog, along with the Big White Scarf

Retrieved from "https://clubpenguin.fandom.com/wiki/Santa_Hat?oldid=1913413"
Community content is available under CC-BY-SA unless otherwise noted.