Not to be confused with the item of the same name from Club Penguin Island.

The Santa Suit was a body item in Club Penguin. Members could obtain it for free at Santa's Sled during the Holiday Party 2009. It also cost 550 coins in the Penguin Style and Holiday Party 2012 Catalogs, and only members could buy it. It could have also been unlocked from series 5 of the Treasure Book. 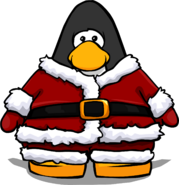 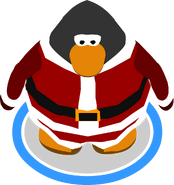 As seen in series 5 of the Treasure Book, along with the Santa Hat, Santa Beard, and Pirate Boots

As seen in the December 2010 Penguin Style catalog, along with the Santa Hat and Santa Beard 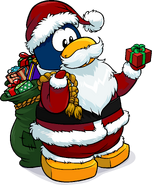 As seen in the December 2011 Penguin Style catalog, along with The Claus, White Fuzzy Beard, and Supreme Toy Sack
Add a photo to this gallery

Retrieved from "https://clubpenguin.fandom.com/wiki/Santa_Suit?oldid=1893138"
Community content is available under CC-BY-SA unless otherwise noted.