The Scorn Crest was a rare pin in Club Penguin. It was hidden in the Boiler Room during the Medieval Party 2012, and all players could obtain it. This pin had to be "made" with the Pin Maker 3000. 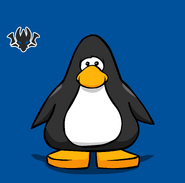 Retrieved from "https://clubpenguin.fandom.com/wiki/Scorn_Crest_Pin?oldid=1919149"
Community content is available under CC-BY-SA unless otherwise noted.