Scorn the Dragon King (also called the Dragon King or Scorn) was a dragon who once ruled over the Sky Kingdom, and Club Penguin Island long ago, who returned years later and was later destroyed by a group of brave knights. He tried to overthrow the kingdom of Club Penguin in 2012. Gary (who was aware of the Dragon King's presence) made knight armor that could withstand the dragons' attacks. He flew over Club Penguin waiting to strike for revenge. His lair was the Mountain of Misery. He was defeated along with his statues, so it is unknown whether this dragon will return.

He flew over the island every 15 minutes during construction of the Medieval Party 2012 at the Town, the Cove, and the Dock.

In Ye Club Penguin on the eve of a royal celebration, Garriana ordered rainbow puffle toots that she needed to create her potion of mighty dragon. Adding the toots to the currently brewing cauldron, something went wrong: the potion began to steam and light green smoke billowed from the frothing liquid. She accidentally opened a portal to Scorn's domain .... releasing him onto the ancient Club Penguin.

Three weeks later, she sent a distress signal to Gary the Gadget Guy in 2014, hoping to establish a partnership in which they would defeat the tyrannical king. Following her request, Gary took the Time Trekker 3000 to Garriana's time. When he arrived, he, Garriana, and a medieval version of Rookie discussed their plans and decided on uniting the five kingdoms in order to defeat Scorn.

However, it was not that simple: throughout their journey, Scorn had struck fear into the hearts of all the kingdoms, leaving them defenseless and weak. He flew to Gary and his crew when they realized this, taunting them of his superiority and power. Yet, his ego betrayed him when Gary used his time trekker once more to summon his family - the Garys - to this moment, where they all defeated him and, following this, banished him with the help of Garriana.[1]

Please note that this may be a separate interpretation from the previous story, as it is from the source of said story.

As speculated in Club Penguin times issue #473, in addition to the legend of him being defeated by Garianna and other Gary's from the future, Scorn also deceived all "good dragons" to take a vacation, so he could become the ruler of Dragons Peak. And, after taking over the kingdoms of Club Penguin, was defeated by the united power of the penguins he had decided to dictate.[2]

In 2012, the dragon king Scorn escaped his well-deserved imprisonment in a dungeon and came back to Sky Kingdom to plot his evil revenge, a modern scientist named Gary was aware of this, and made armor for penguins to wear. They were to gather weapons, such as the Slingshot, and uncovered the legendary Thunder Blade. They raced to the Fairy Forest, the Mushroom Kingdom, and the old kingdom ruins. Finally, they raced to Sky Kingdom for the final confrontation with Scorn. The battle had only begun...

After training and hard work blasting the spheres with the Slingshot, Scorn exploded into pure light energy. The kingdom had been saved! The entire island rejoiced, and the path to the Sky Kingdom was opened.

A menacing and domineering dragon. He provides a villain for the Medieval parties and a great plot device for traditional quests. Inspired by Smaug and Sher Kahn. Both of these stories (see below) establish Medieval as another time period, but one which we don't use the Time Trekker to get to. Scorn generally doesn't threaten the present-day island (or may not even exist there).

Once upon a time, the lands of Club Penguin lived in peace and harmony. They were separated into many different kingdoms: dragons of Dragon Peak, the Fairies and Forest Folk of the Fairy Woods, the Wizards of the Mushroom Kingdom, the penguins of Royal Village, and the Guardians of the Sky Kingdom. Then, one dark day, a mighty beast appeared in the skies. He was Scorn, the Dragon King, and with his evil magic he plunged Club Penguin into darkness Now the lands of Club Penguin cry out for a band of Heroes to gather together, unite the kingdoms, and defeat the Dragon King once and for all!

Scorn was defeated by a group of heroes at the top of Dragon Peak. Peace was restored to the five kingdoms of Club Penguin.[3] 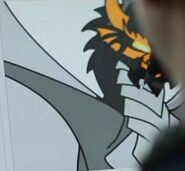 A Club Penguin .swf designer coloring him in with paint

A knight is about to face Scorn with the Thunder Blade

Scorn flying over the Sky Kingdom

A clear view of Scorn flying 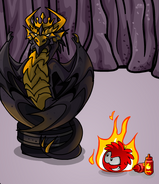 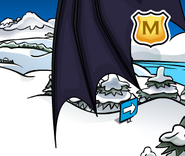 Another picture of Scorn flying past

Scorn's shadow flying over the Town

Scorn the Dragon King in the Sky Kingdom

Scorn when he bursts into massive white spark, showing he is disappearing

Scorn without a knight underneath him

Scorn the Dragon King with a knight under him 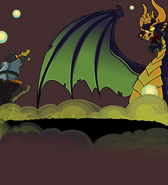 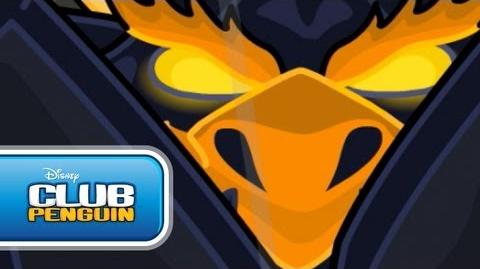