Not to be confused with the Seahorse.

A Sea Dragon is a type of creature in Club Penguin. They are found in the oceans. Rockhopper encountered one when he was shooting snowballs from his Snow Cannon 3000. The Sea Dragon came out of the water with a snowball on its head. Rockhopper said the dragon was angry at him. He gave him Cream Soda which the Sea Dragon drank and swam off. Then Rockhopper sailed on. A Sea Dragon also appears in the Stage play, Underwater Adventure. 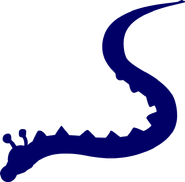 A close up
Add a photo to this gallery

Retrieved from "https://clubpenguin.fandom.com/wiki/Sea_Dragon?oldid=1856484"
Community content is available under CC-BY-SA unless otherwise noted.