Were you looking for EPF Agent? Secret Agents were Penguins employed by the Penguin Secret Agency who, at first, worked to make Club Penguin Island a safer place- afterwards, many Penguins wanted to become Agents for the fun of solving missions. To become an Agent, the player's penguin had to be at least 30 days old. However, if they used a Code from a DS game then they automatically became a PSA and an EPF agent. When penguins were accepted into the PSA, they were sent a postcard, welcoming them as secret agents. Salaries of 250 Coins were also given out. 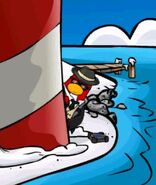 An EPF secret agent grabbing his EPF spy phone, as seen on the Club Penguin home page, replacing the PSA agent.
Not updated1`.jpg
Agent Picking up phone
Add a photo to this gallery
Retrieved from "https://clubpenguin.fandom.com/wiki/Secret_Agent?oldid=560999"
Community content is available under CC-BY-SA unless otherwise noted.