Sensei's Fire Scavenger Hunt was an event in Club Penguin where players had to find items related to fire. It started on September 14 and ended on September 28, 2009. During the scavenger hunt, the sky of the Club Penguin Island turned orange. Sensei also made appearances in the Ninja Hideout.

Inside the Ninja Hideout there was construction, which later led to Card-Jitsu Fire and the new room design. In the Dojo Courtyard, there was a big sign that read "Prepare for a Ninja Journey", and you could have seen a conveyor belt with fiery items on it.

Once you had completed the scavenger hunt, you would receive the Fire Pin, which was in the shape of the fire symbol used in the Card-Jitsu game. You would also get a message saying "You found them all! You're very wise, enjoy the reward when you click "Claim Prize"". 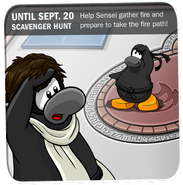 Upcoming Events
Add a photo to this gallery

Underground Pool
Add a photo to this gallery 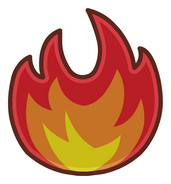 The scavenger hunt icon that appeared in the upper right corner of the screen. It would open a list of currently collected scavenger items when clicked
Add a photo to this gallery