Shadow Guy, known to the island as Sam[2] was a fictional Super Hero that worked with Gamma Gal. He appeared in the Stage play Squidzoid vs Shadow Guy and Gamma Gal. Many penguins have taken the same super hero identity.

While interviewing Gary the Gadget Guy he was electrocuted by one of the aforementioned penguin's inventions, the Toaster 3000. Gary helped him learn to use his powers until he used them to defeat a large mutant blob of pizza dough. He was called the "Mysterious Shadow Guy" in the newspaper, thus he received his name. He later encountered Gamma Gal when attempting to defeat a giant sea monster.[2]

In the Treasure Book with Gamma Gal

Sam, as a reporter for the Club Penguin Times, before he became Shadow Guy

Another image of Sam 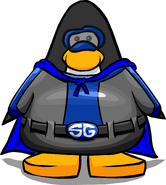 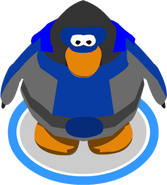 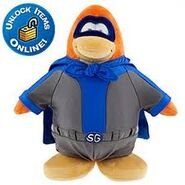 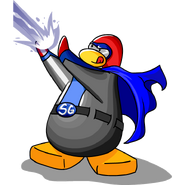