The Silly Dimension (formerly A Silly Place) is a dimension. In 2010, it was a members-only room and had a free King Jester Hat for member penguins. It returned for the April Fools' Party 2011. It was found in a box that had a King Jester Hat on it. In 2012, it was available to all players.

The room is divided into three raised platforms. The first platform is just a clump of dirt raised above the ground with a door that leads to the third platform. The second platform has a throne where penguins can sit. The third has a boat where penguins can tell many jokes by pressing the [J] key. Once the timer runs out, they are rated on the number of jokes. 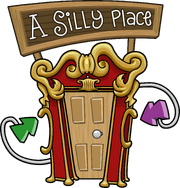