The Ski Hill (formerly known as the Mountain) was a snowy hill in the northwest corner of Club Penguin Island. The Ski Village lied at its base, and the Ski Lift could've been used to scale the hill quickly. Due to the snowy slopes and high elevation, penguins often sled down here, in the game Sled Racing.

The Ski Hill had four tracks, each progressively more dangerous: Bunny Hill, Express, Penguin Run, and Ridge Run. There was also a Test Track, which was the most dangerous of all, and was only accessible in missions. Additionally, a Game Upgrades catalog was located here, which sold different kinds of sleds.

The Ski Hill first opened on November 18, 2005, a few months after the launch of Club Penguin. On April 24, 2009, the Game Upgrades catalog was added, indicated by a Toboggan sticking out of the snow.

On January 23, 2014, the Ski Hill was renovated to compete with the other renovated rooms as part of The Journey.

An early concept of the Ski Hill[1]

As viewed from Herbert's Camp 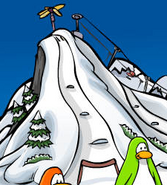 As seen on the old homepage

As seen on the map