The Ski Lodge is a room in the Ski Village, located next to the Everyday Phoning Facility. It is where penguins can play Ice Fishing by clicking on a door marked 'Gone Fishing' as well as Find Four. The Ski Lodge has two stories. The second story is called the Lodge Attic, which also has the Find Four tables.

The Ski Lodge can also be seen in 3D, never seen before in such a style, as found in Club Penguin: Game Day!

The following are the several pins have been hidden in this room: 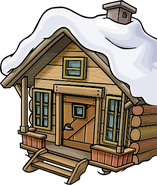 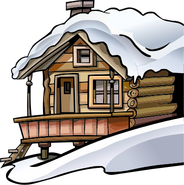 The original exterior.
Add a photo to this gallery

The Cello hidden during the Instrument Hunt.
Add a photo to this gallery

The Ski Lodge during the Halloween Party 2008.
Add a photo to this gallery

Hangin' out at the Lodge.png
A penguin inside the Ski Lodge
Green Plush Chair In-game.PNG
The green lodge chair.

Retrieved from "https://clubpenguin.fandom.com/wiki/Ski_Lodge?oldid=1376667"
Community content is available under CC-BY-SA unless otherwise noted.