Skip was a ghost masquerading as a bellhop at the Puffle Hotel, who appeared during the Halloween Party 2014. He tricked the player through the ghost-infested Puffle Hotel in order to repair a ghost-capturing machine inside the building, so he could continue with his evil plans.

Skip initially presented himself as the new bellhop of the Puffle Hotel during the party. Unknown to the rest of the island, however, he was an evil ghost in disguise as a penguin in order to steal Ghost Puffle energy. After kidnapping Gary's uncle, Gariwald VIII, he tricked the player into capturing and rounding up ghost puffles and machine parts that he would assemble in the storage room on the 12th floor. Once all parts were assembled correctly, he began to extract the energy from the ghost puffles so he could begin terrorizing the Club Penguin Island forever.

Unsuccessful in his plan, the player defeated Skip, and saved the island.

Skip was shown to be cunning, manipulative and resourceful during his time haunting the Puffle Hotel. His motives were to induce fear and sorrow to all around him; this was evident in his capture of Gariwald VIII and later him stating he wished to "haunt" the island. His ambition led to him getting extremely angry or frustrated when people attempted to intervene (an example of this would be him blocking your path on the 13th floor).

Skip disguised as a bellhop 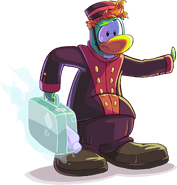 Skip reveals himself as a ghost 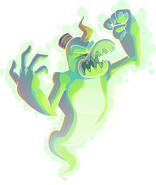 Skip as a ghost

Skip when he appeared as a penguin 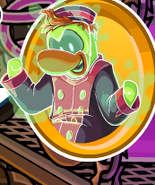 Skip's icon as a Ghost 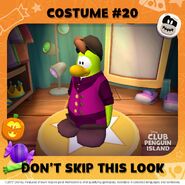 The Halloween costume based on Skip, from Club Penguin Island
Community content is available under CC-BY-SA unless otherwise noted.
Advertisement