Sly is one of the antagonists in the game, Card-Jitsu Snow. He is a Snowman wearing a Ninja Mask, a Blue Polo Shirt and a pair of gloves. He has a Black Ninja Belt tied around his "waist" which shows that he is a Ninja (or at least a relation to them).

A sneak peek sketch of Card-Jitsu Snow. Note Sly is at the far right of the picture

An animation of Sly 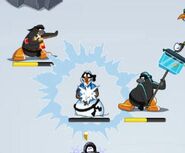 Sly in Card-Jitsu Snow when he is defeated 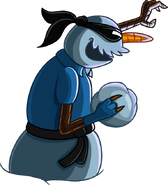 Sly as seen in the Card-Jitsu Party 2013 home page 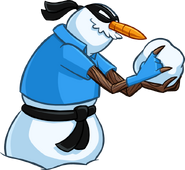 Sly holding a snowball
Add a photo to this gallery
Retrieved from "https://clubpenguin.fandom.com/wiki/Sly?oldid=1820838"
Community content is available under CC-BY-SA unless otherwise noted.