The Smoothie Smash Grand Opening was an event in Club Penguin. It occurred from August 30 to September 5, 2012, during the Adventure Party: Temple of Fruit, after efforts to defeat Big-Big Kahuna. During the event, the Coffee Shop was given a permanent, more modern look, and the Smoothie Smash game was added. There was a huge sign outside the shop in the Town Center that said "GRAND OPENING."

Smoothie Smash was temporarily playable at fruit stands at the Cove, Dock, and Forest during the event. 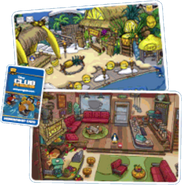 Another sneak peek, this time of the new Coffee Shop

Another sneak peek of the shop

Town
Community content is available under CC-BY-SA unless otherwise noted.