The Snow Gem was a gem that signified mastery of the element of snow, as a Snow Ninja, through training in Card-Jitsu Snow. It was the thirteenth reward in the game, after the four items of the Snow Suit and eight of the nine clips of the Card-Jitsu Saga.

While owned, it would appear on the owner's Amulet. It also allowed the player to access Tusk's Cave from the Snow Dojo. 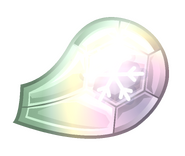 Sensei giving the player the gem