The Snow Monkey is a character in Battle of the Ancient Shadows. He represents the Snow element. He seems to be shy.

In Battle of the Ancient Shadows, he walks up to Ancient Dragon and Sage Fish. He seems to be nervous, but after a few moments he says that he is a huge fan of both of them. Then he blushes and asks if they would battle for him to watch. 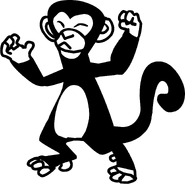 Retrieved from "https://clubpenguin.fandom.com/wiki/Snow_Monkey_(character)?oldid=1864865"
Community content is available under CC-BY-SA unless otherwise noted.