A Snow Ninja was a penguin who had completed Card-Jitsu Snow and had received the full suit. To become one, you would have to earn the Snow Gem by playing lots of matches against the Snow Minions, and defeat Tusk in battle in his cave lair. They were similar to Fire Ninjas and Water Ninjas, both of them had mastered their respective element.

Becoming a Snow Ninja was different than becoming any other type of Ninja. These were the steps:

When you dance you will jump into the air, spin; and land in a sprinting position. When you land, snow, wind and ice will circle around your body.

When waving mist will follow your hand and then begin to spiral around your body until you vanish.

Special dances were also present for the Snow Shuriken, the Water Hammer and the Fire Nunchaku. 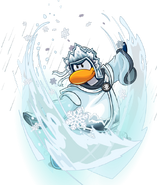 A Snow Ninja holding a card

A Snow Ninja with all gems

When waving in the Snow Ninja suit

When dancing with the Snow Ninja Suit

The Snow Ninja icon once all 24 items are obtained, and completed the whole progress 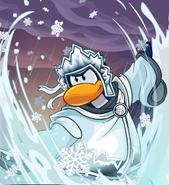 A snow ninja as seen in the Club Penguin Times

The special action when Dancing

The special action when waving 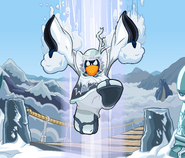 A snow ninja as seen in a Stamp Book photograph

Snowy skies caused by multiple Snow Ninjas in a room