The plant will consume any snowball thrown at it, and each 5th snowball makes it grow larger. The 25th snowball (after growing 4 times) makes the plant burp, and return to its original, smallest size.

The plant is maroon in color, with flattened teeth. In the real world, that would mean the plant is a herbivore, but in this plant's case, it is for capturing and retaining snowballs inside itself. The plant seems to have warm insides because it melts snowballs upon contact. It is an audible creature, making notable chomping sounds and its loud burp after reaching maximum growth.

Water is essential to its survival, and the plant depends on penguins for its existence. Its only source of liquid is via snowballs, considering it hangs in trees and lacks a root system. This key trait of the Snowball Eating Plant indicates a symbiotic relationship. The plant depends on penguins for its food (snowballs) and the penguins benefit from feeding the plant by having fun feeding it. The plant would probably not survive in the usual frigid climate of Club Penguin Island, though due to the tropical heatwave it flourished along with the other plants Rockhopper brought during the Adventure Party. It is probably either a young plant that sprouted late on the tree, or has roots on the ground but hasn't evolved to melt snow with its roots yet, which is unusual because it can melt snow in its mouth pretty fast.

In Layman's terms, it melts snow for food and relies upon penguins to provide the source. 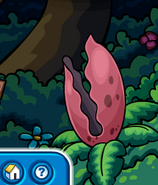 The sign that shows to feed the plant
Community content is available under CC-BY-SA unless otherwise noted.
Advertisement