The Snowball Press was Club Penguin's sole book publishing company. Players could see the logo on the bottom of the spine on all of the Club Penguin Books.

Real Life Books by Grosset and Dunlap (as Snowball Press) 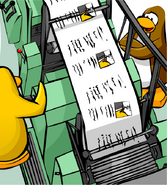 Retrieved from "https://clubpenguin.fandom.com/wiki/Snowball_Press?oldid=1891122"
Community content is available under CC-BY-SA unless otherwise noted.