Start a Wiki
The Soda Seas is an ocean at the lower-north of Club Penguin, only accessible via the Aqua Grabber. It's the second of the two Aqua Grabber levels-the first being Clam Waters. It is an area polluted by many barrels of Cream Soda that fell in, making the water purple and the sea anemones unhealthy. It is the home of the Giant Puffer Fish who guards the valuable Amethyst found in a cave.

To complete the level, penguins must grab soda barrels and put them in the net.

By doing so the anemones will rise up and allow penguins to reach previously inaccessible areas, and finally encountering the level's Guardian, a Puffer Fish, to reach the Amethyst treasure.

After collecting all five barrels players may find a Worm by bumping the top of an air pocket situated west of the center of the sea. Upon catching the worm, known as bait, players may attempt to catch Fluffy the Fish who roams around the upper parts of the sea. The player should then go to the south-east of the sea and try to catch a Mullet. However Fluffy will try to swim in the opposite direction of the Aqua Grabber and try to dash the machine against the rocks. Once the mullet is caught you can let it go and it will swim off, or you can put it into the net for 1,000 extra coins. After going through the tunnel, players will find two paths, one leads upwards to an air pocket, and the other downwards to a Crab, a bubble blower, and treasure. Alternatively, by exploiting a design flaw, the player could try to squeeze between the mullet and the wall and tumble their way through to the other side.

Each piece of treasure is worth twenty coins, and will appear as a gold ball. The crab will also try and take some treasure so players should try to be quick. Note that gold can be stolen from the claws of the crab. Players can also let the crab get all of the treasure. If the player lets the crab get all of the treasure, the crab will give her/him the rare treasure: an Emerald. An Emerald is worth 500 coins. Also, players can catch the Mullet, receiving 1000 coins if they put it in the net and 1 coin if they put only a worm in the net. Players can also receive a Stamp if they take all of the crabs treasure. It is for members only.

A player about to drop Mullet into the net and receive 1,000 coins.

Where Soda Seas could be. 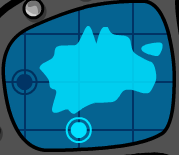 Soda Seas on the radar in the Aqua Grabber.
Add a photo to this gallery

Retrieved from "https://clubpenguin.fandom.com/wiki/Soda_Seas?oldid=1430871"
Community content is available under CC-BY-SA unless otherwise noted.