Soda Treasure was a hard difficulty stamp in Club Penguin, only available to be obtained by members. It could have been obtained in the Soda Seas level of Aqua Grabber. 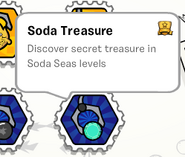 SWFEdit
Retrieved from "https://clubpenguin.fandom.com/wiki/Soda_Treasure_stamp?oldid=1877568"
Community content is available under CC-BY-SA unless otherwise noted.