Space Adventure was a play at the Stage. It was the first ever Stage play in Club Penguin. It first premiered in November 2007 and had an encore in March 2008. It did not return to the Stage again before it was removed in June 2015.

This historical play features a ship landing on a planet called Planet X however, the ship is in bad shape, and needs repairs. Robot and Ensign see an alien approaching the ship, and warn the captain. Everyone is frightened and scared of the alien- except Ensign. She has an idea the alien should visit Club Penguin, and soon everyone thinks it is a good idea. The alien helps fix the ship, and the friends all drive away. 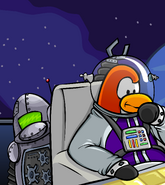